What are you doing with your life?

Hello there! Welcome back or if you are new, WELCOME!

When I was younger I wanted to be a teacher. I used to gather up my little brother and cousins and I would make them play “school” with me. I even had one desk (yes, only one) for my “students” (yes, more than one student) LOL. I wanted to be a teacher up until high school. After I went through the stillbirth I decided that I wanted to be a pediatrician to help patients like they helped me but then that changed… Let me explain…

My first job was a being a tutor at an after school program. I did that for about 2 years during my junior and senior year in high school. While applying for colleges, I shared with the very new “education counselor” that I would like to be a doctor and he told me that it was a hard career path and that he thought I should choose something else (not those words exactly). I wanted to smack him! How dare you tell me what I should be. Now, before you think that I’m crazy, it wasn’t what he said it was how he said it. He had such a snob attitude about it. From that day forward I was DETERMINED to become a doctor just to prove him wrong.

I received a free application to Canisius College so you know I had to take advantage of that( I never turn down free). I had no intentions of applying for Canisius because I didn’t believe I could afford it or that I was smart enough. Canisius is known for being a good and really expensive private school. I got accepted and received quite a bit of funding through HEOP (shout out to my HEOP fam). God is always on time. I was ecstatic and told anyone who would listen. My major at the time was biology because I thought I liked science. 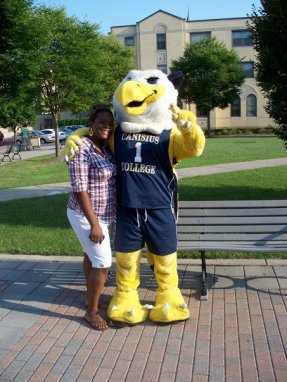 Fist day as a freshman in college

Then I started working in a group home for the developmentally disabled. When I first started at that job I was so scared. I was sure that I was going to break someone and didn’t know if I could handle physically caring for someone else (this was before I had kids). After my first day I had no plans on going back once I walked out that door but my bills slapped me in the face so I did. I eventually grew to love the residents especially since I saw them more than my own family. I worked for two different agencies but at the same group home during that 3/4 year period but was eventually fired. I was devastated. I’ve never been fired before, I was in my last year in college and I had just found out that I was pregnant with my son. I just cried. I ended up receiving unemployment and the job tried to fight me for it but jokes on them because they lost due to not following procedure when they fired me. So things started to look up because I was able to focus solely on finishing school and my pregnancy while not having to worry about work.

Biology was really hard for me (STRIKE 1)  and I honestly think it’s because I didn’t get the proper schooling in high school. Freshman year in high school we went through 4 bio teachers! Maybe this is why I thought I liked science, because all we did was have fun due to the lack of proper supervision. One day while waiting for class to start me and a couple of other students were sitting outside the classroom door. We were about to have a quiz which I was really nervous for but the other kids that were around me weren’t. They said that they had learned a lot of what we were being taught in high school already. I hadn’t learned any of it (STRIKE 2). Everything we were learning was new to me. It was at that moment that I knew I would have to work harder than some of my peers if I wanted to succeed ( I failed bio btw). Then one day in chemistry the professor was handing back our quizzes (which I failed miserably) and a guy behind me got a 90% and he was soo upset. He said that he really wanted a 100 and that no medical school would take him serious if he didn’t get all really high scores. He was way more upset than me and I did way worse. I was thinking that his friends (you know the ones that he was actually talking to and not my nosey ass) would cheer him up but nope they agreed with him (STRIKE 3). It was at that very moment that I realized that I didn’t actually WANT to be a doctor. I mean initially I did but soon realized that I was just trying to do it to prove the stupid counselor wrong. As soon as chemistry was over I went to the registrars office and changed my major to sociology. I felt like a new woman but also like a failure. By this time it was second semester of my sophomore year. I felt like I was staring college all over again and I felt so behind.

I really liked sociology. I wished that I started with that instead of biology. Then I found my true love, Psychology. I LOVE psych! I added psych as a major but eventually changed it to a minor so that I could graduate quicker. After school I worked at a substance use and mental health outpatient facility as an administrative assistant. I took that job because I was interested in becoming a substance use counselor but working in outpatient made me change my mind. I also felt unimportant at that job. I was being treated like just a secratary but was expected to preform “clinical” tasks. I didn’t like being placed in this “box” so I had to go. I am currently a crisis counselor which has been interesting so far. I’m taken a lot more serious and actually have a clinical “voice” that people depend on which is pretty awesome. I am going back to school to receive my masters in of course psychology. I not only picked psychology becasue I love it but I also like that it is more general and it gives me more options for careers. To be honest I still don’t know 100% what I want to do. I’m thinking counselor long-term but who knows.

I said all of this to show how much life can change. You may think you have it all figured out but then BOOM just like that you are on to something different. This post is specifically for people who just don’t know. I’m here to tell you that its ok NOT to know. Don’t give up at the first sign of discouragement! You are what you want to be. There is no book about life and how we should live it. Know that everything wont be for you but instead of beating yourself up about something not going right, look at it as a lesson learned. Most of us are so hard on ourselves that we end up being our own road block to success. We talk ourselves out of things becasue we are scared of failure or change but sometimes that’s what we need. Sometimes you need to fail to find something better and sometimes you need change to challenge yourself. Most successful people had to fail in order to succeed. Steve Jobs and Oprah are two VERY successful people who proved that this is true. Use my failures as motivation and use this post to let you know that you aren’t alone. Pick your head up, put on your big boy/girl underwear, stick out your chest and let the world know they can’t fuck with you. You are your best motivation and your own worse enemy. Don’t be embarrassed to share your failures because you never know who you may help.

As always, thank you for reading

Book’s I’ve read & my thoughts about them